Chapter 4 starts off fairly simple - you’re working entirely with flat shapes that are all internal to the aircraft. The only curves are the edges.

The front seatback is very simple - cut down a slab of 0.75“ thick foam, shape two of the edges to be 45°, and glass it. Following the advice of other builders, I used a tablesaw to make those cuts. You can see the result below.

The foam for the front seatback prior to glassing. Closeup of the 45° edge on the front seatback foam. A few days later, I did the next step, which is to add micro and UNI fiberglass to one side. I interpreted “micro” in this case to be wet micro, not micro slurry. We’ll see how it turns out.

I cut out 2 lengths (approximately 42-45 inches) of full-width UNI and laid them out. I had to cut and rearrange the glass while laying it out, and there was some excess, but this worked well. Instead of using the polyester sheet as peel ply, like I had previously, I used plastic sheeting. We’ll see how it turns out.

The forward side of the front seatback, while curing after being glassed. The forward side of the front seatback. As you can see, it turned out fine. I did go back to using polyester peel ply for the aft side of the front seatback. Which also turned out fine and was relatively easy to pull out.

The F-28 Bulkhead is a relatively small piece, and will be made of fiberglass glassed onto clark foam. I cut the foam out using a utility knife and a Fein tool.

One side turned out better than the other. The first side I glassed, I put down a significantly thicker layer of wet micro than I should have. I determined that while that wasn’t enough of an issue to warrant remaking the part, and made a note to only place a thin layer of wet micro when I did the other side.

The image below is a composite image of both sides of the F-28 bulkhead, which shows the differences in the layup. Each side is labeled for convenience, both sides of F-28 received the same amount of fiberglass. The Instrument Panel is a little bit larger than the F-22 bulkhead. I made this by cutting pieces of it out of clark foam, and them gluing them together with 5-minute epoxy. Afterwards (much later in my case), I laid up both sides with 2 layers of BID everywhere, and then a layer of UNI running top span only.

Note: I actually ended up using UNI instead of BID for this. Which while not according to spec, I don’t expect this to be an issue. I’m also expecting to make a slightly different instrument panel later on, to account for the glass cockpit I’m intending to build.

Tip: When adding the doubler, be sure to apply wet micro to both sides of the doubler. Micro is supposed to applied to every side of foam that touches glass.

I had built out one F-22 bulkhead, with the aft face looking pretty decent. However, I had made a number of errors glassing the forward side. These errors were such that I’d essentially have to strip most of the fiberglass from the forward side. Additionally, after discussing this with other people, I realized that I had added way too much wet micro to the foam. With both of those, I made the decision to remake the F-22 bulkhead entirely.

For the second go around, I had ordered more clark foam to use. Which meant I could be way more liberal with material usage as this high-density clark foam is not used after this chapter. This meant that I could minimize the amount of joins I needed to make, which made things a little bit easier.

Glassing the aft face went went. It took a while before I got around to trimming the excess fiberglass. Once I did, the next day I glassed the aft face.

For all three of these bulkheads, I initially misread the plans and made them out of high-density clark foam like the other bulkheads are. These should be made out of lower-density PVC foam, which I am working on remaking these with. Thankfully, I had not done much other than assemble the foam core of the bulkheads. Additionally, these are still useful as templates for making additional copies of the foam cores.

When I remade them with the correct foam, I was able to cut them in one piece - no epoxying with 5-minute epoxy required.

When joined in the fuselage, the landing gear bulkheads will form a box. The fuselage struts will be bolted on in between the hardpoints on either side. I made 12 inch by 8 inch sheets of 22 ply BID fiberglass for the bulkhead hardpoints. Which is enough to make 8 hardpoints. Which has turned out to be a good mistake because I irreparably damaged 2 of them with my trim router while I was trying to trim them to their final shape.

Tip: If you’re using a handheld router, hold the router with both hands. Don’t try to hold it with one hand, and a vacuum hose (for dust collection) with the other. I was lucky and didn’t get hurt when this happened.

My second attempt was much more successful. I didn’t bother with the router at all, and cut the fiberglass with an oscillating tool. I used a belt sander for final shaping, and it came out quite well.

However, my forward landing gear bulkhead was built with the 3 layers as described in the plans. Unfortunately, I rejected this part after curing both sides because I accidentally used the wrong kind of fiberglass.

On 2022-09-11, I discovered that some replacement BID I had switched over to in August was actually UNI. This mistake was due to blindly trusting that the BID I had ordered was actually BID, without verifying that. Once I realized this mistake, I went through my build footage to check which parts were affected, and to my relief, it was really only the forward landing gear bulkhead (the other parts I had used the not-BID for were either rejected, or were the stiffener ribs on the instrument panel, which I don’t think will be an issue). I marked that part as not-for-flight, ordered new foam and fiberglass, and made a note to check that in the future the fiberglass I receive is actually I actually ordered. Once the new fiberglass came, I did verify that it was actually BID, and that the fibers were running as they should be.

The next forward landing gear bulkhead I made had what looked like too many air bubbles over the hardpoints. After trying to sand off enough fiberglass to repair that mistake, I realized it would be faster to just cut off the hardpoints and re-use them with a new foam core. Which is exactly what I did.

This third forward landing gear bulkhead I tried was successful. This is where I had the idea to try adding epoxy to the hardpoints before adding fiberglass, which worked amazingly well. Once both faces were glassed, cured, and trimmed, I sanded off the stray glass then drilled the quarter-inch holes into the forward bulkhead.

(The white spots here are artifacts left over on the very top layer of epoxy from pulling off the peel ply, not indications of air bubbles. Took me a while to realize that too. It means the layup was a little too wet.)

I made a mistakes here, which I didn’t discover until near the very end. The top and bottom 45° edges are not supposed to be glassed. I did glass them. Fortunately, because these edges didn’t turn out evenly, decided to sand them off, with the intention to reglass them. I should’ve stopped once I sanded those layers off, but I also thought the faces should still be glassed, so I also sanded off some nearby fiberglass, per the instructions for doing repairs. I have since re-glassed those areas, and am awaiting curing.

Additionally, after I glassed the upper face, while removing the peel ply, I took off some of the top layer of UNI. Which isn’t a big deal. Sand down the area to create a good surface for a mechanical bond, also sand the surrounding area a bit. And reglass with a layer of BID (to replace the layer of BID I damaged by sanding in to), and a layer of UNI. Just in the affected areas. Not too difficult. 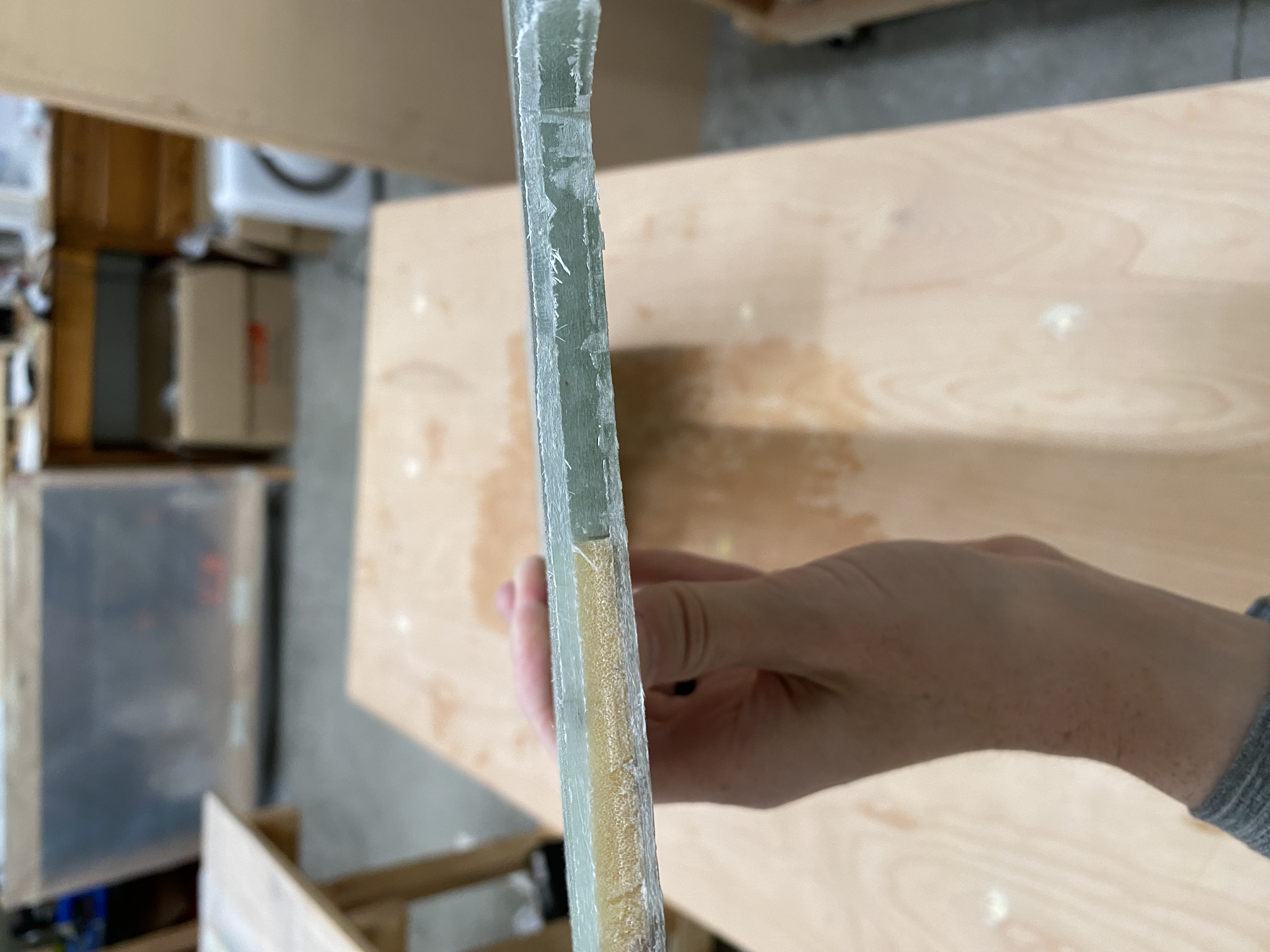 Status: Temporary firewall complete. 3 out of 4 pieces of the permanent firewall are also complete.

Temporary firewall, cut from a large 4x8 sheet of 1/8 inch birch ply I got from a big box store. It’s terrible wood, but that doesn’t matter because it’s not going to fly. It’ll be used briefly in chapter 6 as a fit check before assembling the fuselage with the lower piece of the permanent firewall. The permanent firewall is made out of very high quality baltic birch (with a price to match).

I delayed building the permanent firewall due to worrying about the blind screws. The way you’re supposed to secure the blind screws is essentially by applying a bunch of flox and hoping that the epoxy holds - has been known to cause a ton of issues, because the flox does not handle torque well. There are a couple possible solutions. One is to use hex bolts and chisel out a recess for the bolt heads. Another is to use clickbonds from cozygirrrl. A third is to wrap a metal thread around the screws. After some deliberation, I decided to go with hex bolts. I ordered a bunch of AN3-5A hex bolts from Aircraft Spruce (21/32“ nominal length, 1/4“ grip length, cadmium plated, undrilled), and will be finishing the firewall with them once they arrive.

After the hex bolts arrived, and not a whole lot of other excuses to put this off, I decided to start cut out the aluminum blocks for the engine mount. This was a pain, because I don’t really have metal cutting tools available to me. Thankfully, aluminum can be cut with woodworking tools - it just takes a while. I cut these 4 using a dremel and my oscillating tool. This was my first time using a dremel, and I’m just happy I didn’t explode a cutting wheel. If I were to build another firewall, I would 100% buy already-cut blocks of aluminum. Even if I have to oversize them, it would be worth it to me. 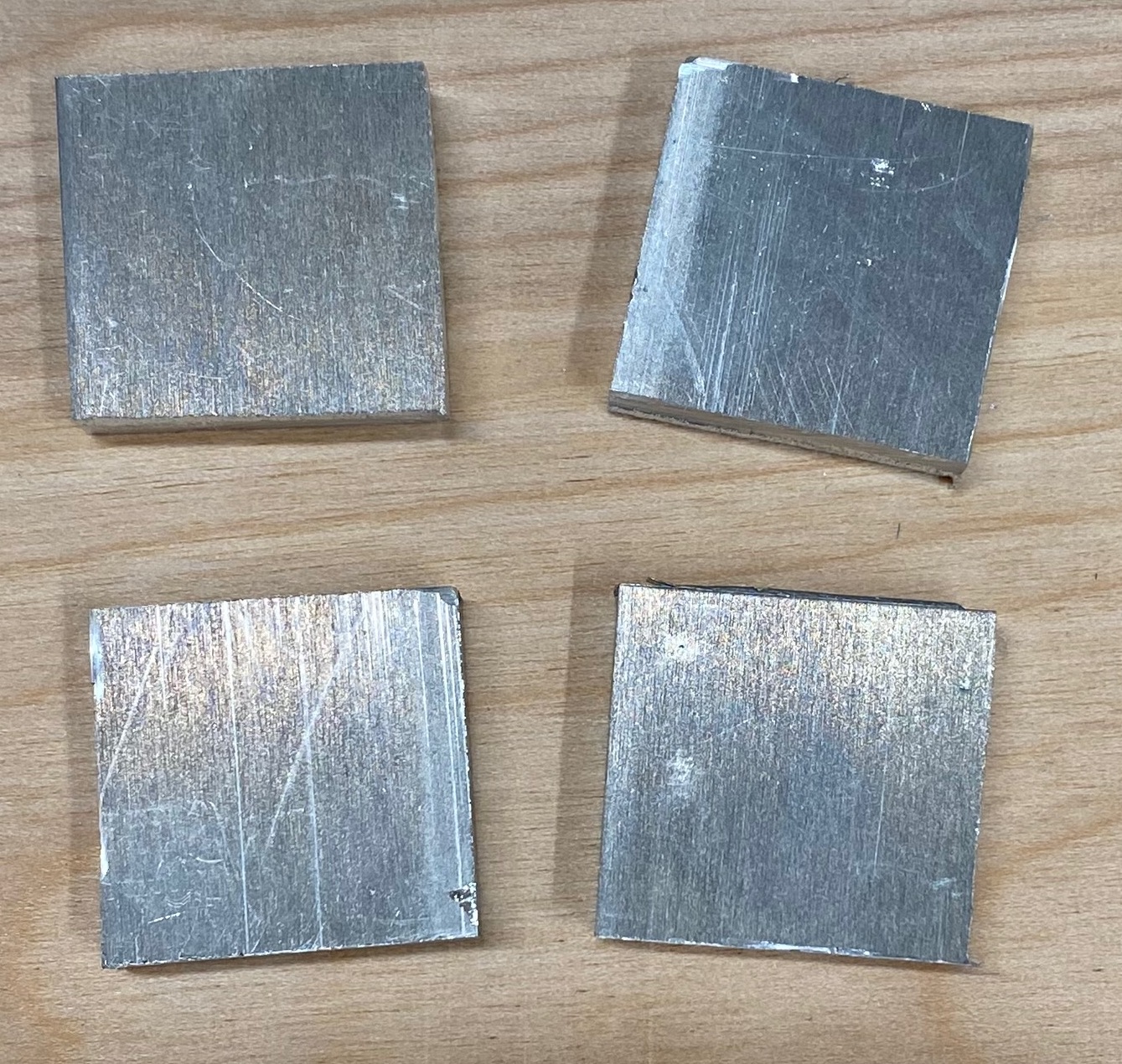 A few days after I had cut the motor mounts, I installed them in the firewall pieces and glassed the aft faces of all 4 pieces of the permanent firewall.

About a week after glassing the aft face, I used a dremel to route out recesses for the hex bolts. I installed the hex bolts, using flox to fill out the remaining space, and then glassed the forward faces of the firewall pieces.

The next day, I pulled off the peel ply. I lined up pieces for a final “yay, I’m done” photo, when I realized I had accidentally made 2 copies of the left-middle piece. 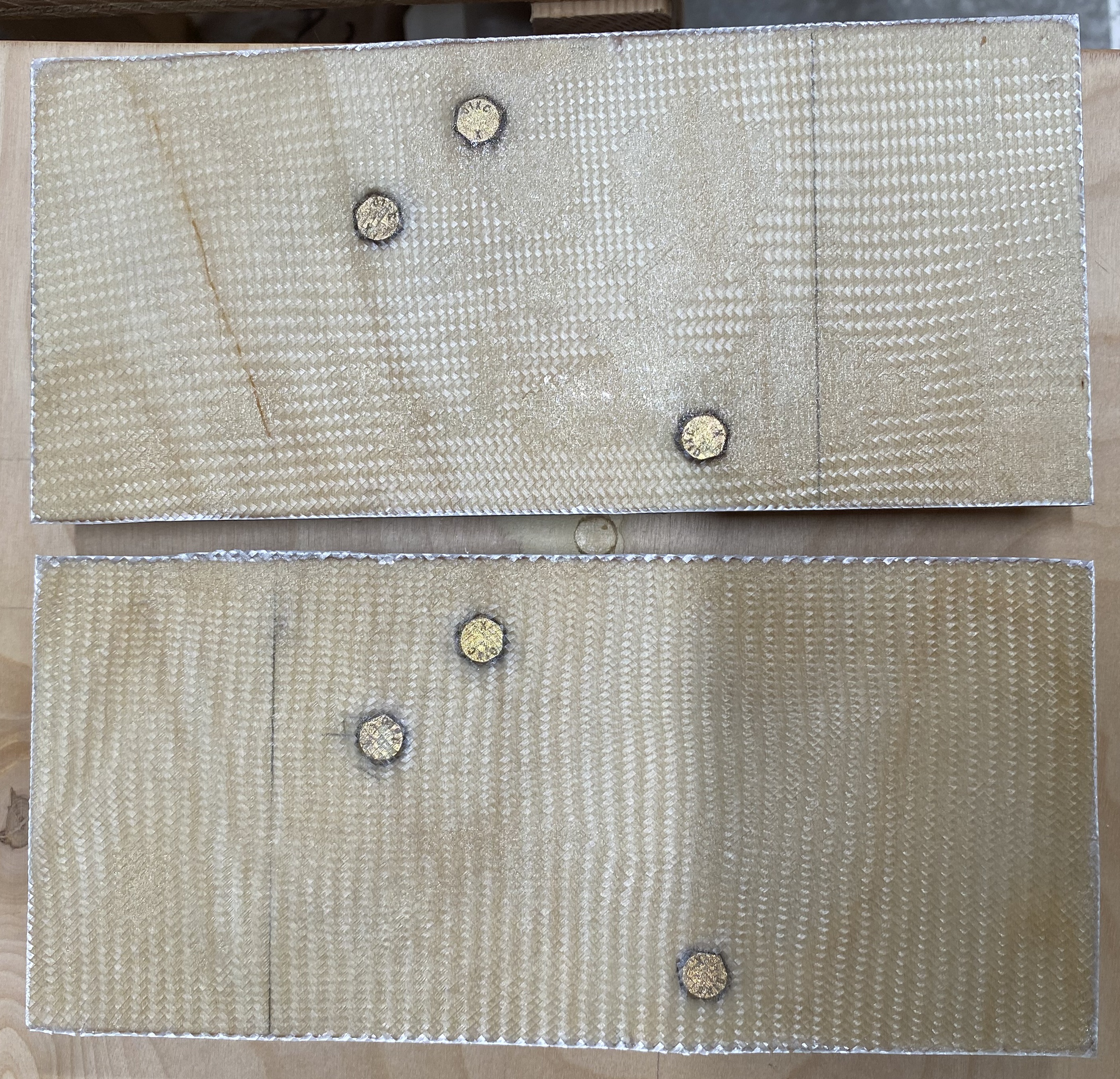 The following day, I cut out a wood core for a right-middle firewall piece. I marked where the bolt holes should go, then I marked which face is which. Then I checked that those markings were correct. Twice. Then I glassed the aft face of that firewall piece. A few days later, I drilled out the recesses for the bolts, installed the bolts, and laid up the forward face. The next day, I pull off the peel ply and cut off the excess fiberglass. Thus completing the firewall pieces and chapter 4. 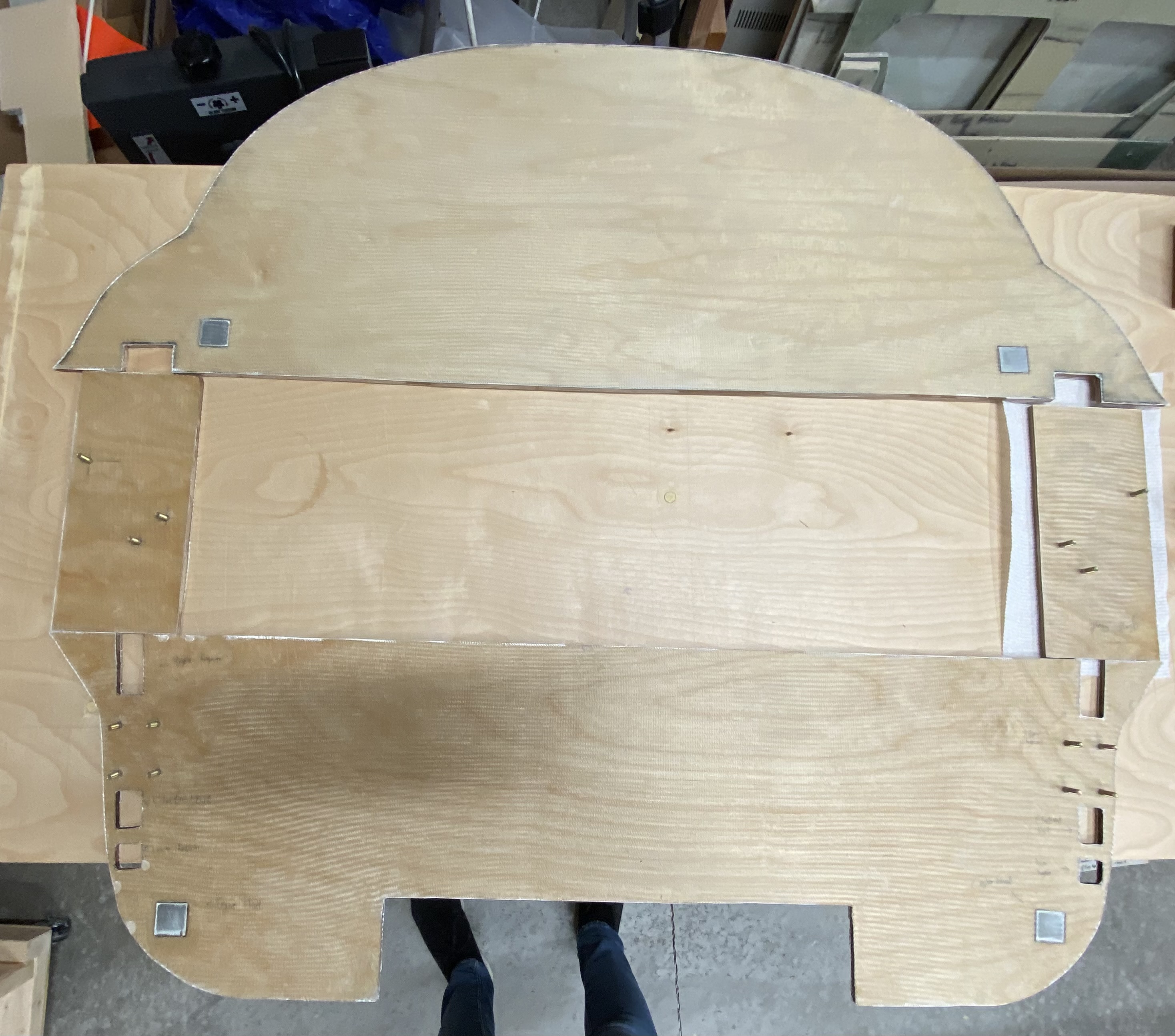